Is an archaeological- palaeontological cave, where bear’s skeletons and 30,000-year-old tools of a Stone Age man were discovered. It is the site where worlds second oldest suture was found.

Potočka zijalka (Potočka zijavka) is an important cave site at 1675 meters above sea level on the slopes of Olševa. In this 104 m long and 40 m wide cave, Ice Age hunters left behind lances, needles, scissors and other tools, mostly made from bones of a cave bears. Every year, at the end of winter, Potočka zijalka is decorated with ice stalagmites that that reach up to 2m in height, creating a unique fairy-tale ambience with a magnificent view of the Logarska Valley and the Kamnik-Savinja Alps. A permanent exhibition on the life of stone hunters can be found at the Firšt restaurant, before Logarska Valley.

At the starting point, you can visit the permanent exhibition Potočka zijavka in the Firšt Museum and Inn. If the inn is not open, you can visit the museum on your return. From there, follow the footpath once used by the inhabitants of Podolševa, head towards Sveti duh, where the baroque church of the Holy Spirit stands at an altitude of 1250 m above sea level. There are also two tourist farms nearby. Passing the Rogar farm, you continue your way to Potočka zijavka on Mount Olševa, which is the first archaeologically researched site from the Old Stone Age (Paleolithic) in Slovenia. The oldest knitting needle made from bone was found here, as well as numerous tools, bone tips, bone flutes, dyes made of iron ore (okra) and a large number of fireplaces.

New findings reveal that Potočka zijavka was the sanctuary of Cro-Magnon hunters. 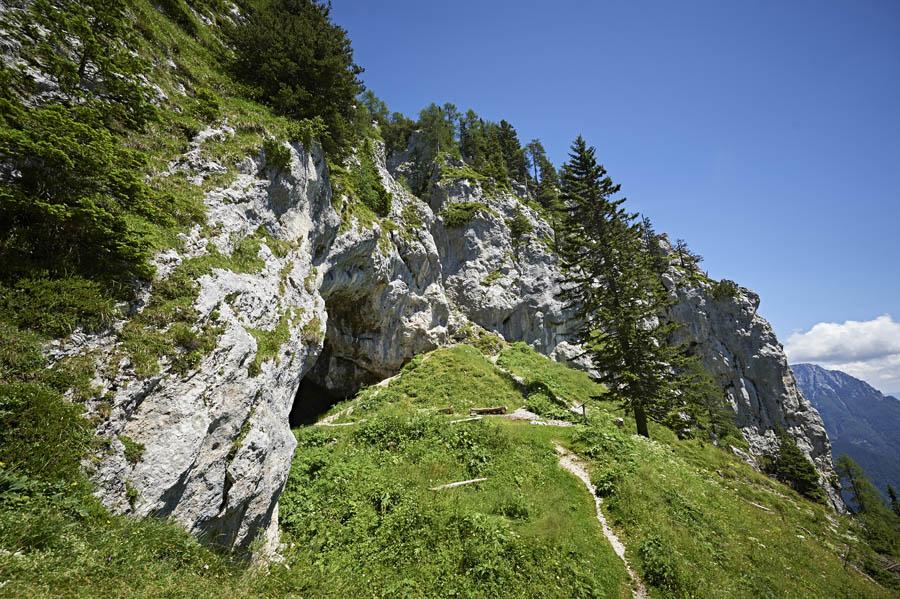 Cavetours, the mysterious cave world of the Savinja Valley and neighbouring Austria

The Savinja valley and the Austrian countryside are covered with underground caves. Friendship and good cooperation with neighbouring Železno Kaplo in Austria led to the Cavetours project, allowing you to experience the cave systems of both countries. The Austrian Obir Stalagmites Caves with an 800 m long underground world are truly inspiring.

In Solčava continue in the direction of Podolševa, Solčava panoramic road and the church of St. Duha. The starting point for the trip is at the Rogar farm. You will need an hour to cover approximately 500m in altitude.

Sparkly water spring is a mineral water spring under Olševa, that is prescribed healing powers. It is considered a natural treasure of Slovenia. Health from Nature Water that comes from the spring is naturally rich in...

In the immediate vicinity of Luče lies the charming Ethno Village Luče, a park of eight houses, where locals present their handcrafts, from forging to tailoring. Along the lively Savinja River and the imposing...