The old centre of the Šalek valley, first mentioned in 1199, is now known for its nearby thermal baths with a favourable position and climatic conditions for health and relaxation.

The Šoštanj area was inhabited by its native people until the Middle Ages. Due to its geographical location acting as a link between Koroška and Savinja valleys it developed a vibrant market.

The economic development of Šoštanj continued with the leather industry of the Vošnjak family, which in Šoštanj set up one of the largest leather plants in the Austro-Hungarian monarchy. The urban development of the Šoštanj area was halted due to coal excavation, which resulted in the formation of the Družmirsko Lake the deepest lake in Slovenia. Today Šoštanj Thermal Power Plant generates on average one third of all Slovenian electricity, children often referring to it as the “cloud factory” because of the steady steam that flows from its chimneys.

Sights and tourist spots in Šoštanj and its surroundings

Experiences in Šoštanj and its surroundings: 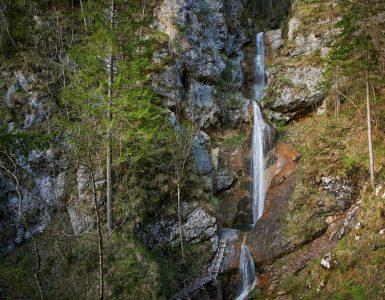 Take a pleasant half-hour walk. From the magical, 250-year-old Žager’s Mill the path leads past a larger puddle with a diverse fauna and flora to the refreshing Repov Waterfall.