Visitors of Upper Savinja Valley are inspired by Logarska Valley which is according to Lonely Planet one of the most beautiful European alpine valleys, from Solčava as the European Destinations of Excellence.

The stunning cliffs of the Kamnik-Savinja Alps, the picturesque natural parks of Logarska Valley, Robanov kot and Golte, the wild and no less attractive valley of Matkov kot, the nature reserve Menina montain and the lively rapids of the Savinja River are a real paradise for active holidays in the country of nostalgic farms, there is no lack of hospitality and excellent local cuisine with local culinary specialties and delicacies such as the Zgornjesavinjski Želodec dried meats delicacy.

The winter fairy tale at the Golte ski slope is perfectly complemented by relaxing in the healing waters of Terme Topolšica which is a real relaxation for the soul and the body. You will be entertained with a rich program of events in the spring and summer and Mozirski gaj, a flower park full of inspiration and colourful energy.

Most popular sights in the Upper Savinja Valley

The most beautiful experiences in the Upper Savinja Valley

Logarska Valley is one of the most beautiful Alpine valleys in Europe. It hides countless natural sights and is a true paradise for lovers of hiking in unspoiled nature. It is embraced by mighty two-thousanders of...

If you are looking for a corner for inspiration and relaxation, the Flower Park near Savinja is the right choice. You will be enchanted with colourful billets and imaginative exhibitions. Romantic atmosphere is a dream... 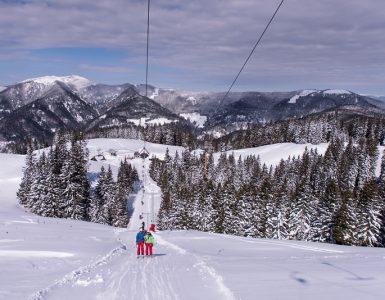 Golte is a high plateau on the eastern outskirts of the Kamnik-Savinja Alps. In winter, one of the major winter-summer mountain centres in Slovenia. During the winter it attracts mostly winter sports enthusiasts, while...